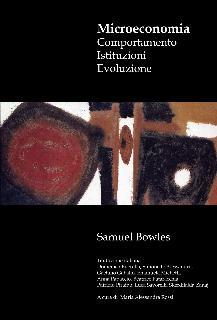 The Italian translation of the book Microeconomics . Behavior, Institutions , and Evolution ( Princeton University Press, 2004) , sponsored by the Department of Economics, University of Siena, was edited by M. Alessandra Rossi. The chapters of the book in PDF format can be freely downloaded from this web page .

This text is an innovative introduction to microeconomic theory , based on the most recent developments in evolutionary game theory , the theory of contracts, experimental economics and the theory of dynamic processes. The perspective developed in the book makes light of, among other things , on the influence of institutions on individual behavior and the way in which institutions evolve due to individual actions , technological change and random events .

The English version was adopted as a reference text in many universities , as part of advanced level courses and doctoral courses and received a warm welcome from scholars such as Kenneth J. Arrow, Kaushik Basu , Ken Binmore , Eric Maskin , Ariel Rubinstein and Peyton Young.

" The competitive standard neoclassical model of human behavior has been significantly expanded in the last fifty years through the emphasis on interaction in small groups ( game theory ) , larger models of human motivation based in part on human evolution and the existence of conflicting information bases of the participants. a rich but dispersed literature has now found a brilliant synthesis and development in the new book of Samuel Bowles . Microeconomics is an indispensable component of the future of teaching microeconomics at the level of doctoral courses and of degree courses of advanced level, as well as an excellent source of information for the economist . "
- Kenneth J. Arrow , Stanford University
Samuel Bowles is Professor of Economics at the University of Siena and Research Professor and Director of the Behavioral Sciences Program at the Santa Fe Institute.